Toblerone was created by Emil Baumann & Theodor Tobler (1876–1941) in Bern, Switzerland, in 1908. Emil Baumann, the cousin of Theodor Tobler, created the unique recipe consisting of milk chocolate including nougat, almonds, and honey. Theodor Tobler came up with the distinctive triangular shape and packaging. The product's name is a portmanteau combining Tobler's name with the Italian word torrone (a type of nougat). 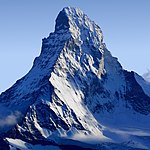 The Matterhorn in the Alps served as inspiration for the bar shape.

The triangular shape of the Matterhorn in the Swiss Alps/Italian Alps is commonly believed to have given Theodor Tobler his inspiration for the shape of Toblerone. However, according to Theodor's sons, the triangular shape originates from a pyramid shape that dancers at the Folies Bergères created as the finale of a show that Theodor saw.

Nevertheless, a silhouette of the Matterhorn appears on the modern Toblerone packaging